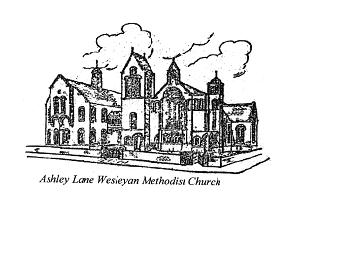 I was in my teens when it was decided that all the churches in the Moston area would join together and make one church called Moston Methodist Church.

As all the churches would be coming together at Ashley Lane we didn’t feel the impact as some of the other churches who were closing down.  By the time we moved up to Moston Lane we had got used to the idea.  We did question why, as our building was much bigger than any of the others, we couldn’t all stay down at Ashley Lane instead of extending the building on Ilkley Street. It was explained that the Streetfold building was in better condition and that also it was on a main road.  I remember as teenagers we didn’t think much of the reply.  Looking back I can see that this was the right thing to do as the Ashley Lane building was not in a good condition.

Ashley Lane was a big building consisting of a large church in the shape of a cross with a balcony over the back of the church.  There were choir stalls in the chancel.  The ceiling of the chancel was blue and decorated with gold stars. Around the curved archway above were the words ‘O worship the king in the beauty of holiness’. (I was told as a young child that my grandfather did some of this decoration as he was a painter and decorator.)  The Sunday school part of the premises was a large rambling old building which was joined on to the church by a long winding corridor. There were many rooms in this part of the building some were only used for storage, others were used as club rooms, class rooms etc.  There was a large hall upstairs with a stage fully kitted out with lighting etc., on which the dramatic society presented two plays a year, and the Ladies Social Hour put on at least one evening of very good entertainment a year.

I remember that there was only one toilet in the school part of the premises, this was upstairs.  There was one other toilet next to the minister’s vestry near the church but this was the holy of holies and we were not allowed to use this or maybe as children we were too scared to use it.